TACLOBAN CITY – The Regional Director of the National Bureau of Investigation (NBI) here said yesterday that as of this moment they have no reason to “discredit” the testimony of Charlie Chong who accuses PO2 Intong Saul as one of the primary suspect in the ambush incident last June 7 in Naval, Biliran where two persons were killed and another one fatally injured.

Lawyer Antonio Pagatpat said that the NBI will always respect the process of law, considering that earlier multiple murder and frustrated murder cases have already been filed by Chong, the father of Biliran Cong. Glen Chong, and is now pending for preliminary investigation before the Biliran prosecutions office.

Pagatpat said the case is now in the hands of the prosecutors in Biliran to find out if there is really a prima facie evidence for Saul to be prosecuted.

“There is no reason for the NBI to discredit the testimony of Chong… It is for the prosecutors assigned in this case to validate all evidence submitted by the complainant, as this is a command case of the NBI where our role here is only to investigate and file the case against somebody but will depend on the evidences we have,” Pagatpat said.

The NBI, which was asked by the family of Rep. Chong to conduct a separate investigation of this case, according to Pagatpat, found out a positive lead for them to pursue their in depth investigation.

“We have positive leads and we are hoping to solve this crime as soon as possible, yet I don’t have to reveal anything as to any partial result of our investigation but I tell you we are already there to complete our works,” Pagatpat added.

It was also clarified by the NBI regional chief that they have to forget politics while the investigation is going on and what they have now in their minds that the incident claimed two lives and that justice should be rendered to the victims.

The NBI is targeting the month of July to finish the investigation, as they are only hoping that witnesses and other persons will cooperate and support to the NBI agents conducting the investigation.

It may be recalled that the group of the elder Chong was on their way to the store owned by the family when a red vehicle blocked their way. Two assailants alighted from their car and right away trained their weapon against the victims.

Killed on the spot were a former barangay Captain named Alberto Parilla while Antonio Barcelo was woun-ded including Jose Casas, the driver of the Chong family.

Senior Supt. Arcadio Lelis, head of the task force which is investigating the case said that based on their partial investigation robbery and politics are the motives.

Evidence and validation of other statements are still going on.

Earlier, Chief Supt. Abner Cabalquinto, PNP regional director, said that the case is not yet totally solved even with the filing of criminal case against PO2 Saul who is now under the custody of the Biliran PNP provincial office. 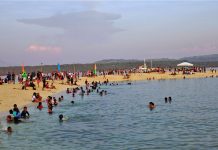