THE results of the June 2008 Architects Licensure Examinations came on the same week as the more ballyhooed board exams for nurses. Without much hoopla, another Cebuano placed among the top 10 of this year’s new crop of architects.

Arch’t. Pat Jason Leones Meracap, a graduate of the University of San Carlos, was the lone Visayan top passer, ranking forth in the eternally backbreaking examinations held in Manila.

Jason reveals that it was his friends who kept on saying that he would be a board topnotcher.

“It (topping the boards) never crossed my mind. I just read the materials available during my review and at the same time, practiced on my free hand sketching skills,” he says.

Although he felt confident about passing after the final exam day, a little paranoia about failing still bugged him until the results came out.

Way back when he was about to enter college, architecture was never among his options. The 24-year-old native of Naval, Biliran, was supposed to take up accountancy in Tacloban.

However, upon the advice of his brother, who was already studying in Cebu, he pursued his education here so he could “watch over” him.

“When I arrived in Cebu, I planned to enroll in Fine Arts. But one of my brother’s friends suggested that I take up architecture. As they say, the rest is history,” recalls Jason.

Before each licensure exam there are always episodes of intense review and preparations. In between burying himself with books and notes, Jason watched Prison Break DVD’s and mingled with friends who became co-reviewees. He had to give up “beer sessions” and home visits to his family in Biliran in the duration of his review.

However, to inspire him, he always remembered the few pieces of wisdom given by family and mentors.

He says that he got the best advice from his apprenticeship “boss”, Arch’t. Jose Mari Cañizares. Having a positive outlook in life, he said, was one of the most indelible lessons he received.

“Our boss also reminded us often of how different the actual practice is from our education in school. I remember when he said in Cebuano: “While you were in school, you were taught to swim in the pool but after you graduate, you will have to swim in the open sea full of sharks.”

As a new architect, Jason puts premium on his continuing professional development. So aside from joining the United Architects of the Philippines, he recently took the master plumbers licensure examinations. He also plans to take up his masters degree next semester. And unlike starry-eyed yuppies looking to leave their motherland for so-called greener pastures abroad, he plans to stay and practice here.

With his unassuming aura and cool confidence, this topnotch architect is indeed worth emulating.

For future architects and board examinees, he has this to say: “Know your limitations, study hard but always take time to relax.” 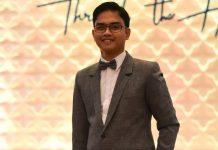