Naval, Biliran (8 October) – After several months of waiting for the secondary students in the province of Biliran to finally ride for free in going back and forth to their respective schools to attend classes starting this school year, the eight school buses procured by Representative Glenn Chong will start serving their transportation needs starting next month.

Rep. Chong in an interview with PIA revealed that the school bus system will start its full operation by November this year since he will still plan an effective and efficient scheme to avoid wastage of fund intended for the purpose.

The 34-year old solon said that he will allocate the amount of P6M for the full operation of the P9.121M worth school buses to include the salaries of drivers, fuel costs and other maintenance and operating expenses.

He expects that the seven 50-seater big buses and one 23-seater mini- bus painted with his lucky colors, yellow and green can serve some 4,000 students a day province wide.

These school buses are all air conditioned with soft reclining chairs and with a television set each inside.

He disclosed that he was told by his fellow representatives in Congress that maintaining a school bus system is a “money burner” because it requires a big budget for its operation. However, he candidly said that he will have to keep his campaign promise to the Biliranons in the 2007 elections despite the huge financial requirement in maintaining the school bus system.

It was learned that Representative Glenn Chong is one among the past and present members of the House of Representative coming from Eastern Visayas that maintains a school bus system.

In the entire Eastern Visayas region, it was him and Mayor Mel Senen Sarmiento of Calbayog City who operate a school bus system at present.

Rep. Chong informed that he learned from Mayor Sarmiento that the school bus system has inspired students in his locality to attend class everyday coupled with the desire to finish their studies someday.

Meanwhile, Rep. Chong informed that he is vigorously working for the conversion of Naval Institute of Technology (NIT) into its university status.

He said that House Bill No. 1927 converting NIT into a state university has already been approved in the House of Representatives and he expects the bill to be approved by the Senate in June next year.

Presently he is asking the support of Senator Allan Peter Cayetano who is the chairman of the Education Committee in the Senate for the approval of the bill.

The bill converting NIT into Naval State University, principally authored by Rep. Chong has already passed its third and final reading in the House of Representative last September 9, 2008 and was already treated for first reading last September 16, 2008 in the Senate..(PIA-Biliran) 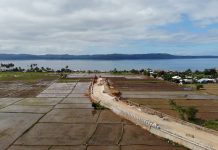