NAVAL, BILIRAN – A vigilant community, aided by an Internet crowd, has halted a surreptitious attempt to mine and smuggle out bulk quantities of raw mineral resources from this island province.

The issue came to the fore recently when concerned citizens and local pro-environment groups were alerted about an application for a small-scale mining permit to extract white clay, a raw material for ceramics-making, from a 20-hectare public domain in the upper part of Barangay Tucdao, Kawayan, north of the island.

The permit application, filed by Rowena C. Ang of Barangay Balite, Kawayan, was scheduled for public hearing in Barangay Tucdao originally on Nov. 22. This was postponed, apparently in view of the strong opposition from the local residents and their parish priest, which sprouted overnight.

The public hearing was eventually held on Nov. 29, but by then, the mining issue in Biliran had already exploded in the Internet, mainly in the blogs section of www.biliranisland.com.

The permit issue reported in the Internet soon exposed the related on-going sulfur mining in Caibiran town east of the island, which was previously unknown to the general public.

On May 6, 2008, the Biliran provincial government through Gov. Rogelio J. Espina issued Small-Scale Mining Permit No. 2008-001 to one Ranulfo F. Kuizon, for the extraction of sulfur in Sitio Pulang Yuta in Barangay Cabibihan, Caibiran.

The sulfur mining activity reached the attention of Fr. Benjamin C. Pantas, parish priest of Caibiran, around June or early July. He visited the minefield to see for himself, and to bless the death of an infant who had died of pneumonia. He also heard about respiratory cases from nearby residents, attributed to the dust and fumes from the minefield.

Father Pantas noted that the area was already “heavily mined” during his visit, apart from signs of an old mining activity. He also saw trucks transporting loads of sulfur-embedded earth material extracted by buck hoes from the ground or cliffs around the minefield towards a segregation area.

A view of the sulfur mine in the upland of Caibiran, Biliran. (Photo courtesy of www.biliranisland.com).

Many of the employed laborers were recruits from Southern Leyte . The mine management also employed child laborers to segregate rocks and soil with high sulfur content and to place these inside straw sacks.

The laborers were issued disposable face masks to protect them from dust and fumes during work, but they rarely use this item, claiming it is inconvenient for their breathing.

The sacks of segregated rocks and soil were transported by trucks to the beach, where a barge would land, load the cargo and transport them towards the direction of Samar . Loading was usually done at night. Laborers in the mines were paid P165.00 a day. and the guards around the area were paid P175.00.

In a video footage of an interview uploaded in www.biliranisland.com, Father Pantas criticized the overall secrecy surrounding the sulfur mining activity in Caibiran. He is willing to admit that the operation is legal, but he doubts that the proper procedures were observed in its realization.

He attested that no prior public hearing was ever conducted on this sulfur mining issue in his town. He said he is also not aware of local resolutions that sanctioned the venture.

The priest feared the mining’s effect on the local residents, including the possibility of another tragedy similar to what happened at Barangay Guinsaugon in St. Bernard, Southern Leyte , which buried a thousand residents due to landslides in Feb. 2006.

Father Pantas brought up the sulfur mining issue, his observations in the field, and his opposition to its operation with Governor Espina in Naval.

In due time, the priest was furnished a letter from the governor, addressed to Kuizon, informing him that the issued mining permit was revoked effective Oct. 16, 2008. A complementary billboard installed by the provincial government in Sitio Pulang Yuta also announced that the area was closed to mining.

The revocation letter cited non-compliance of the following conditions: 1) to have the workers undergo medical check-up; 2) conduct reforestation activities within and adjacent the mined-out areas; and 3) non-use of heavy equipment in extracting sulfur materials as provided for in mining laws and decrees.

But when a group of media practitioners and concerned citizens, with permission from the municipal government, visited the heavily-guarded mine site last Nov. 28, they found out that the mining operation was still in full swing.

It was believed by a recipient of the governor’s revocation letter believed that this document looks like a bureaucratic buffer to cushion or hide the official inaction or other plots.

However, another visit by the same concerned citizens last Dec. 10 showed that the mine area has been abandoned of workers and heavy equipment.

In an editorial of concern titled “This land in mined” posted in the Internet, an unnamed blogger lamented that “some decision-makers at the Biliran Capitol do not seem to run out of stealth in their attempts to steal from the patrimony of the Biliranons.”

The blogger noted that the recent mining controversy came on top of alleged scandals involving overpriced hospital equipment and computers; Capitol equipment, materials and paid labor that went into the construction of a private resort; and the exhaustion of the loan potentials of the provincial government with the banks.

Related attempts in the past to report these anomalies could not be published because efforts to get the side of the Biliran provincial government were met with absolute silence, not even a denial.

Within days of the posting of the editorial, a blogger named Aquarius posted an item informing that a Navotas-based company, Regentjef Intl., had advertised in 2007 in www.alibaba.com, a global trading website, offering to sell large volumes of volcanic yellow sulfur from Biliran.

Sulfur with purity of more than 99.7% was offered at $550.00 per metric ton. Huge volumes were offered with a deliverable quantity of 1,000 metric tons per month.

Another product item from Biliran offered for sale in the same website is white clay, with a supply ability of 20,000 metric tons per month.

A reliable source had revealed that the sulfur mining permit in Caibiran was worth P2.5 to P3-Million in goodwill money given to the signatory. However, this alleged bribery was denied to have occurred by Sofronio Dacillo, Jr., environmental management specialist of the provincial government, who in turn asked if the information came from a priest.

Dacillo was sent as the governor’s representative to a conference held last Dec. 4, sponsored by the Diocese of Naval to thresh out the stand of the local clergy on the mining issue.

Another conference resource person was Anthony Marlon Mecaral, webmaster of www.biliranisland.com. He briefed the priests about the cyberspace discussion on the Biliran mining issue in his website and his reporter’s observations in the field.

The priests eventually decided to oppose mineral mining in Biliran.

It turned out Kuizon is just a dummy in this sulfur mining venture. Reliable sources said his mining rights have been bought by a Raffy Salazar, a Tacloban businessman with known family links in Almeria and Naval towns.

Refusal of the provincial government to release documents stalled efforts to report about the real corporate and other personalities involved in this mining venture in Biliran, who allegedly include “big people” in government.

The entire sulfur mining area in Caibiran looks vast and wide at the ground level. But a Google Earth map of the Caibiran grid shows that the four active vents and volcanic cracks that produced the sulfur cover only a total area of about one square-kilometer. The largest area being mined measures 300 ms x 100 ms. Road tracks on this site are visible in the close-up of the Google map.

Three vents are located along a wide, barren lava field of the 1939 eruption of the Biliran volcano, the only active volcano in Eastern Visayas .

The Caibiran sulfur field was known to have been mined by Spanish prospectors in 1877. It was abandoned in due time reportedly due to marketing problems.

A Bureau of Science report published in 1907, complete with geologists’ estimates and cost-benefit analysis, had it that an investor in the Caibiran sulfur field would earn a net profit of only about P1,500.00. Even if multiplied a thousand times to adjust to the present day rates, the amount would still not equal the alleged bribe in exchange for the permit.

The Internet-posted editorial expressed belief that the seven-month old sulfur mining activity in Caibiran has already exhausted the viable supply of the raw material for now. It would probably take decades for the sulfur deposit to be replenished by the volcanic vents to its pre-mining quantity early this year.

The blogger noted that the revocation of the sulfur mining permit and its flimsy reasons were anti-climactic.

Although rumors have it that the sulfur mining activity is earning millions of money for its investors, there are local observers who believe that this equipment-driven venture has failed.

The sulfur mining failure might have forced the diversion towards white clay mining, which does not require expensive intermediate processing compared to sulfur.

But when the public hearing in Tucdao was announced, the local communities have been primed to a level of vigilance. They displayed their version of “people power” in opposing the mining permit application during the thrice-postponed hearing last Nov. 29. It was attended by scores of people coming from neighboring barangays and towns.

It was discovered during the hearing that the permit applicant could not even present a feasibility study for their proposed project.

On Nov. 30 the editorial “This land is mined” appeared in the Internet. It must have stung the governor, because his environment officer inquired about the identity of its author from the website owner at the diocesan conference. The answer was, “I don’t know.”

Last Dec. 2, Governor Espina wrote a letter to Rowena Ang, expressing that he cannot issue the permit because of the strong opposition of the local population, which he had to heed.

The governor also wrote: “I have strongly resolved that I shall never issue a mining permit or allow any mining operation in the Province of Biliran throughout my remaining tenure in office.”

But like his earlier revocation letter for the Caibiran sulfur mining, few people seriously take the governor’s word in his letter pertaining to white clay mining in Kawayan.

An anti-mining advocate told this reporter that a farm-to-market road project that reaches the white clay mining area, has already been contracted to Ang’s father-in-law. This development contradicts the governor’s refusal letter.

On his part, Biliran Rep. Glenn A. Chong has issued a statement regarding the mining issue. He said, “I add my voice to the increasingly clear voice of the people of our people rejecting these kinds of mining operations within our still-pristine islands.”

“Mining is not a sustainable driver of our economy,” he added.

A vigilant local community, supported by pro-environment groups, the local clergy, Internet bloggers and their congressman might have scored an initial upset victory in stalling mineral mining activity in Biliran. But it remains speculative how long this victory could be protected and sustained in the future.

(With a report and photos from Anthony Marlon Mecaral.) 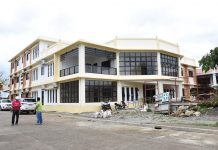 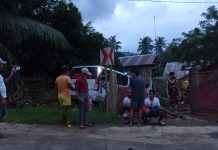