TACLOBAN CITY — In what could be a first of its kind, members of the House of Representatives who passed and approved House Resolution 1109 face a complaint for abuse of power and unbecoming and unethical conduct before the Ombudsman.

By passing and approving the said controversial resolution, the majority-allied congressmen “blatantly” violated Republic Act 6713 otherwise known as the Code of Conduct and Ethical Standards for Public Officials and Employees, Victor Del Rosario, the complainant, said on Monday.

The 26-year old Del Rosario is a first-termer councilor of Naval town, Biliran who filed his one-page complaint before the Ombudsman-Manila last June 11. He claimed to be allied neither to the administration nor to opposition.

“…The collective act of the majority members of the House of Representatives is a blaring display of abuse of power, political arrogance, and most of all a shameless disregard of the Philippine Constitution which clearly provides for a bicameral form of legislature composed of the House of Representatives and of the Senate of the Philippines thereby grossly violating the essentials of Republic Act No. 6713 or otherwise known as the “Code of Conduct and Ethical Standards for Public Officials and Employees…” part of Del Rosario’s complaint state.

He asked the Ombudsman, “being the protector of the people” to conduct and investigation on the alleged unbecoming and unethical conduct of the majority members of the House of Representatives which is headed by Speaker Prospero C. Nograles.

Del Rosario, reached on his mobile phone, said that as public officials, the congressmen must at all times, “upholds the dignity of the Constitution and interest of the nation over and above personal and political interests.”

What the congressmen did when they approved HR 1109 was clearly motivated by their own self-interest as they disregarded the Senate on this issue, he added.

Their act was a blatant violation of the 1987 Constitution, Del Rosario said.

The majority members of the House of Representatives approved Resolution 1109 which seeks for the conversion of the House into a constituent assembly paving the way for possible amendments to the Constitution.

Del Rosario said that he is optimistic that the Ombudsman would take due course to his complaint.

“To me House Resolution 1109… is constitutionally impaired,” he said, describing the controversial resolution adding that by-passing the Senate, they have “disrespected” a political institution of equal level.

“What they did was a blatant violation of the Constitution which they are supposed to protect and preserve. As public officials, their loyalty should be to the Constitution, to our country and not to any political party or person,” Del Rosario said.(JOEY A. GABIETA) 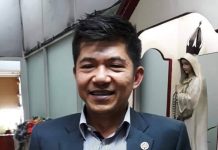 Biliran Province: Filing of certificates of candidacy for the May 13, 2019 elections