Naval, Biliran – One person was shot last night inside the Provincial Capitol compound here where hundreds of protesters have been massed for the second consecutive night, clamoring justice for electoral fraud allegedly committed by a local political family. Ricky Parilla Tumamak, 21, of Brgy. Smo. Rosario, was among a group of protesters trying to chase away the presence of armed men in civilian clothes at the back of the COMELEC building. One of these men shot at him while fleeing away on board a pick-up van parked inside the compound.

Tumamak was brought for treatment at the Biliran Provincial Hospital, where he remains under observation. He suffered from a through and through gunshot wound on the left shoulder.

A riot dispersal unit from the Philippine National Police Regional Command in Tacloban reportedly arrived here last night to help the local PNP contain the situation. This morning, they barricaded the entrances and exit roads towards the Provincial Capitol. They specifically prevented the entry of people into the compound as well food and water for the hundreds of protesters inside. 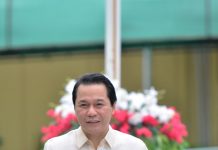