Biliranons have all the reasons to thank President Gloria Macapagal-Arroyo for the many benefits they have received during her administration that lead to the improvement of their lives.

This was the general statement of a number of Biliranons who were interviewed through mobile phone by PIA Biliran this morning after they have seen the President on television in her five-minute farewell statement last night.

On the other hand, a representative from the farmers sector who requested anonymity said he is ever thankful to President Gloria Arroyo for the many infrastructure projects she poured in to the province of Biliran through the local officials especially on the farm-to-market roads, at least marketing of his farm produce to the market outlets in town is made easier and faster.

He said, because of the almost completed circumferential roads of the province, he is able to market his products not only to the capital town of the province but also to the neighboring towns.

A national government employee, who also requested anonymity for fear of being identified with the administration said “I felt sad that President Arroyo bid farewell of her Presidency last night because she still has lots of good programs for the upliftment of the lives of every Filipino, sana maipagpatuloy sa ating susunod na Pangulo ang mga magagandang programa niya”.

Although majority of those interviewed were appreciative of the accomplishments of the Arroyo administration, representative from the youth sector who requested not to be named said that the President is a good leader whose concern is for the improvement of the lives of every Filipino especially the poor but her administration was tainted with alleged corruption.

The general reaction of the Biliranons in last night’s Farewell Statement was that they felt sad she has to step down to Presidency on June 30 at noontime but they have no choice.

“Her good performance will be a legacy to all Filipino including us, Biliranons,” as they said “ Good luck Madam President”. (PIA-Biliran) 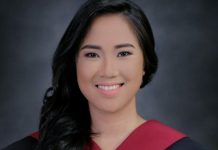 Biliranon passers in the CPA exam