More evidence of election manifestation was discovered in Brgy. Asug, Caibiran, Biliran. In an Affidavit of Complaint submitted by Mr. Charles Padoga Chong last July 2, 2010, he requested to redress the election offenses committed by the Board of Election Inspector of Brgy. Asug for Clustered Precinct No. 26A, 26B, 27B The affidavit reads that BEI Chairman Fe C. Rosete, Poll Clerk Nestor Ticoy, Jr., and Third Member Felicitas S. Baleyos, being public officers took advantage of their positions to manipulate some of documents. Herewith, several registered voters of Brgy. Asug did not able to vote during the election; however, the BEI made it appear that those persons voted during the May 10, 2010 Synchronized National and Local Elections.

This people, whom for one reason or another did not able to vote during the mentioned electoral exercise, but, in the Voters Registration Record (VRR) and the Election Day Computerized Voters List (EDCVL), they appeared to have voted on that day.

This allegation was supported by the Affidavit of some personalities who happens to know those voters to falsify their presence on that day and to question the validity of their votes.

It also appears that on the VRR and EDCVL, that there is no affixed thumb mark of the above mentioned voters and only the word “VOTED” was written on the voter’s signature. And this was verified to have voted through the signature of the BEI chairman underneath it. 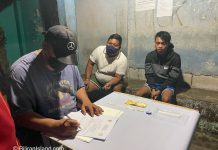