AMULETS. A key and three medallions, all of bronze, are said to belong to Padre Inocentes Garcia, who founded the Naval pueblo on Biliran Island in 1850. They are among the amulets hanging from a permanent waistbelt of a 105 year-old tambalan. The photo was taken early today, Oct. 2, the fiesta of Naval. Ruperto “Pintong” Garcia, 105 year-old tambalan, is certainly one of the very few living Filipino centenarians. Here he shows me a piece of “live” stone, which he said served as a lucky charm for winning cockfights by my maternal grandpa, Santoriano Orbeta, his close friend. My granda passed away around 1973. ORACION. An oracion code, said to be intended for an emergency situation, is one of three such codes written in red ink in Ruperto “Pintong” Garcia’s booklet. I saw somewhere in the initial pages the common oracion: “Sator, Arepo, Tenet, Opera, Rotas.” This one, written in five lines on walls of some houses in the rural areas, can be read horizontally and vertically. 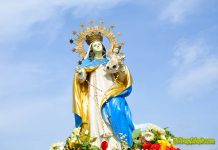 Schedule of Activities for Naval Fiesta 2016