The Search for the Prettiest Biliranon faces on Facebook 2010 was launched recently as an added feature of BiliranIsland.com. The contest is as fair as can be. Any voter who would like to vote for a candidate can vote only once using his/her FB account. 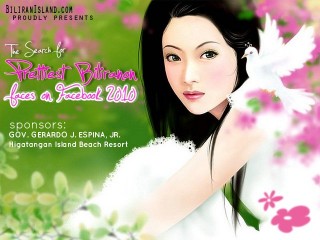 Although we admit that a few thousands of the 12,700+ fans registered with the Biliran Island Facebook account open their own accounts at least once or several times a day, more thousands do not have that luxury. Indeed, many of them would have a chance to open their Facebook accounts only during weekends or rarer than that. It is the latter group that we would like to accommodate by moving the deadline of the contest until November 30.

This is not the first time we had moved our deadline. Please note that we also moved the deadlines for the submission of entries as well as the elimination phase of this competition.

As a result, a total of 58 candidates from all over the province had been nominated for the contest; we had fewer than that number before we extended the deadline.

During the contest proper, we also extended the deadline of voting for the elimination phase, from which we derived our Top Ten finalists (which turned out to be 11 because of a tie in the votes).

Those who had entered the Top Ten spots are as follows:

The prizes for this contest include a glass trophy, a dress, Sony USB 4Gb flash drive, and P3,000.00 cash prize for the lone winner.

The sponsors of this contest are Gov. Gerry Boy Espina and Higatangan Island Beach Resort.