MANILA, Philippines—Funds have been pooled from the people of Biliran to bankroll the search for the truth in allegations that the province’s elections last May 10 was tainted by fraud.

In a statement, Association of Women Religious of Naval (AWRN) said a 58-year-old nun, Sr. Erlinda Lanigao, has decided to help put the money together to pay for docket and filing fees to push the investigation of the elections.

AWRN said Lanigao, of Sisters for Christian Community in the diocese of Biliran, helped raise P887,000 and pay P771,000 in docket and filing fees for the case.

The group said Lanigao was “taken aback” when people approached her and handed over an accumulated donation of P1,300 during one Mass after the launch on July 12 of “Manual Recount Fund-Raising Campaign for Truth and Justice.”

“The move to file a protest against Dr. Rogelio Espina was the initiative of the people,” AWRN quoted Lanigao as saying in its statement.

“The people said yes when I asked them if they were willing to pay the price of an electoral case,” the nun was quoted as saying.

The nun opened a joint account with a volunteer of Parish Pastoral Council for Responsible Voting (PPCRV), the election watchdog accredited by the Commission on Elections last May 10, at a bank to protect the funds.

Lanigao, a volunteer of PPCRV, was quoted as saying donations continued to pour in from “people from all walks of life,” including from high-school students of La Naval State University.

She was quoted as saying that on September 20, she and two other volunteers went to the House of Representatives Electoral Tribunal (HRET) from the town of Naval to pay P790,000 in filing fee for the protest case.

“The official receipt showed the fees were paid for by the people of Biliran,” said AWRN, quoting Lanigao.

“This was the first time in the history of Biliran that the people were the ones who paid for an electoral protest,” the AWRN statement continued.

Lanigao went to the HRET, where the case is now pending, with two other volunteers—a member of Seventh Day Adventist and a laywoman—to follow up the case.

“People came to me to ask about the status of the complaint,” the AWRN statement quoted Lanigao as saying. AWRN said two busloads of Biliran residents went to the HRET last October 15. 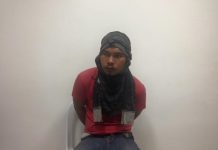 The end of the prowl of the serial sex fiend