This has reference to a news item which appeared on page 2 of your March 2, 2011 issue of the Samar-Leyte Daily Express, written by a certain Alvin P. Cardines and entitled “3 nursing schools face possible closure”.

First of all the article is not very accurate in its presentation of facts that the writer gathered only from a short phone interview with the undersigned. Secondly, the writer made his own interpretation of some of the facts that specifically refer only to the performance of schools in the last Nursing Licensure Examination (NLE) held here in Tacloban City last December 2010.

In view of the inaccuracies and wrong interpretation, I am constrained to make the following clarifications in the interest of truth and in fairness to all those affected by the news item:

1. The interview was only about the performance of schools in Region VIII on the NLE conducted in Tacloban City, last December 19 and 20, 2010.

2. The pertinent facts are:

c. Out of the twelve (12) HEIs who are listed in Region VIII as among those who sent their students to take the December 19 and 20, 2010 NLE, there are only three schools in Region VIII who did not meet the average national passing average for the December 2010 NLE of 35.25%.

3. The question of which schools in Region VIII should be closed or are in danger of being recommended for closure as a result of being classified as “non-performing schools” is a matter that is under the jurisdiction and mandate of the CHED, not PRC.

4. There is a process and protocol followed by the CHED in the matter of closing schools.

5. “Non-performance” in the PRC administered licensure examinations is just one of the determinants for closure of the program and/or the school. The HEIs are usually given up to five years to “make the grade”. Meeting the national average for passing at the very least, in each licensure examination is usually a major consideration, among others.

6. The undersigned did not categorically name the three schools in Regional VIII that “face possible closure” as a result of just one licensure examination, particularly the December 2010 NLE. Besides, the CHED does not necessarily close schools, but only “failed” academic programs of schools.

7. It is wrong and inaccurate to report that, and I quote that… “The three nursing schools…which have been identified as non performing schools are San Lorenzo Ruiz College,…Naval State College…and Asian Development Foundation College” just on the basis of one NLE exam conducted in December 2010. This is clearly an erroneous and a personal assertion of the writer, Mr. Cardines.

There are other inaccuracies but the foregoing are the major ones that need to be rectified and clarified. May I suggest next time, your prestigious newspaper should send me an experienced reporter, instead of a cub reporter who conducts his interview on the phone only. A more matured and experienced writer might have written a different report. Your reporter by the way came to see me and claimed that his original manuscript was changed by your editor.

In the interest of the truth and fairness in reporting, kindly publish this clarification for the benefit of everyone who was affected by the subject news item.

I look forward to your continued cooperation with PRC and your commitment to be “Positive, Fair and Free”. 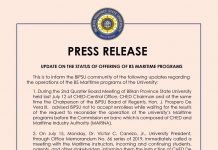 UPDATE ON THE STATUS OF OFFERING OF BS MARITIME PROGRAMS