Tokyo (CNN) — The most powerful earthquake to hit Japan in at least 100 years unleashed walls of water Friday that swept across rice fields, engulfing towns, dragging houses onto highways and tossing cars and boats like toys. 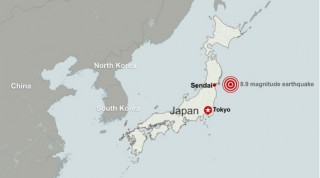 And the 8.9-magnitude quake, which struck at 2:46 p.m. local time, prompted the U.S. National Weather Service to issue a tsunami warning for at least 50 countries and territories.

Its epicenter was offshore 373 kilometers (231 miles) away from Tokyo, the United States Geological Survey said.

But residents there continued to feel aftershocks hours after the quake. More than 30 aftershocks followed, with the strongest measuring 7.1.

“I wasn’t scared when it started … but it just kept going and going,” said Michelle Roberts, who lives in central Tokyo. “I won’t lie, it was quite scary. But we are all OK. We live on the third floor, so most everything shook and shifted.”

A spokesman for the U.S. military bases in Japan said all service members were accounted for and there were no reports of damage to installations or ships.

President Barack Obama, while offering his condolences, said the United States was standing by to help “in this time of great trial.”

Japanese Prime Minister Naoto Kan said an emergency task force has been activated, and appealed for calm. He said there were no reported leaks of radioactive materials from power plants.

At Tokyo Station, one of Japan’s busiest subway stations, shaken commuters grabbed one another to stay steady as the ground shook. Dazed residents poured into the streets after offices and schools were closed. Children cried.

The quake toppled cars off bridges and into waters underneath. Waves of debris flowed like lava across farmland, pushing boats, houses and trailers. About 4 million homes had no power in Tokyo and surrounding areas.

Firefighters battled a fiery blaze at an oil refinery in Chiba prefecture near Tokyo.

Residents said though earthquakes are common in Japan, Friday’s stunned most people.

“My wife was the calm one … she told us to get down and put your back on something, and leave the windows and doors open in case a building shifts so you don’t get trapped.”

Richard Lloyd Parry said he looked through a window and saw buildings shaking from side to side.

“Central Tokyo is fine from what we see, people are calm … and not going inside buildings,” he said.

Such a large earthquake at such a shallow depth — 24.4 kilometers (15.2 miles) — creates a lot of energy, said Shenza Chen of the U.S. Geological Survey.

As the city grappled with the devastation, a massive tsunami swept across the Pacific Ocean.

An earthquake of that size can generate a dangerous tsunami to coasts outside the source region, the National Weather Service said.

In Philippines alone, the tsunami is expected to hit in the early morning and the government has evacuated coastal areas.

The National Weather Service issued warnings for more than 50 countries and territories.

The wide-ranging list includes Russia and Indonesia, Central American countries like Guatemala, El Salvador and Costa Rica and the U.S. state of Hawaii, where warning sirens were sounded in the morning. A tsunami warning was also issued for areas along the United States and Canadian west coasts.

While some officials feared that waves from the tsunami could be high enough to wash over entire islands in the Pacific, at least one expert said it was unlikely.

The tsunami could cause significant damage and flooding, but “washing over islands is not going to happen,” said Gerard Fryer of the Pacific Tsunami Warning Center.

Humanitarian agencies were working with rescue crews to reach the people affected.

“When such an earthquake impacts a developed country like Japan, our concern also turns to countries like the Philippines and Indonesia, which might not have the same resources,” said Rachel Wolff, a spokeswoman for World Vision.

Wolff said her agency is helping people on the ground in Japan and teaming up to help others in countries along the path of the tsunami.

The tsunami could cause damage “along coastlines of all islands in the state of Hawaii,” warned the U.S. National Oceanic and Atmospheric Administration. “Urgent action should be taken to protect lives and property.”

Tsunamis are a series of long ocean waves that can last five to 15 minutes and cause extensive flooding in coastal areas. A succession of waves can hit — often the highest not being the first, said CNN meteorologist Ivan Cabrera.

The quake was the latest in a series in the region this week.

Early Thursday, an earthquake with a preliminary magnitude of 6.3 struck off the coast of Honshu. A day earlier, a 7.2-magnitude earthquake had struck off the same coast, the country’s meteorological agency said.
The largest recorded quake took place in Chile on May 22, 1960, with a magnitude of 9.5, the USGS said.
The quake Friday was the fifth-strongest in the world since 1900, the agency said and the most powerful to hit Japan since then.