NAVAL, Biliran – The provincial government of Biliran in cooperation with WORD-KALIPI and the Provincial Council for Women’s Welfare, Inc. (PCCWI) is all set for the 17thWomen’s Congress this coming March 17 to 18.

The two-day activities are in consonance with the Women’s Month celebration which is centered to the theme: “Magna Carta of Women, the Philippine CEDAW: In Support of the Millenium Development Goals”.

Provincial Social Welfare and Development Officer Flordeliza Trani disclosed to PIA staff in a recent interview over Radyo Natin – Naval that for the past 17 years since the provincial government initiated the women’s congress, more women, to include children, are coming out in the open to report abuses against them with high hopes of achieving justice.

This manifestation, according to Trani, is most probably the result of the discussions on several laws and provisions that protect the welfare of women and their children during women’s congress. Thus, women are empowered and never become afraid to claim for justice due them.

For her part, Dr. Cecil Espina, PCCWI President, urged women as well as men to attend the said congress to be able to listen to topics to be discussed which include the rights, responsibilities, and limitations of women, children, and parents within the family.

Aside from the trade fair where visitors can buy Biliran products, those in attendance to the congress will also learn many crafts and skills which they can employ to augment family income.

The principle behind every women’s congress is to empower every woman in Biliran so that they may become effective partners to their husbands in augmenting family income and in raising responsible children who can be productive citizens of the country. # (PIA Biliran) 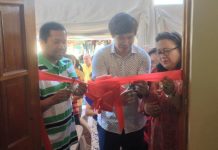 Biliran women’s month celebration kicks off with a provincewide motorcade