NAVAL, Biliran – In order to make it easy for farmers living in far flung barangays to transport farm produce to barangays along the national highways leading to the municipality which is the center of commerce and trade, Mayor Dominador Agajan of the local government unit (LGU) of Almeria, one of the eight municipalities of the province of Biliran prioritizes the construction of farm to market roads (FMR) in the area.

In a mobile phone interview with Mayor Agajan, he revealed that he has already lined-up the construction of FMR for those barangays and sitios in his municipality whose roads have not been cemented yet.

“It’s already in the plan of the municipality of Almeria and it all depends on the funds, and once the funds are there, the work will immediately commence,” he said.

“The FMR will surely help the farmers of Almeria town improve their lives and make a difference in their income as it will be easy for them to market their farm produce,” he added.

Mayor Agajan informed that the construction of the FMR from Sitio Binog in Brgy. Pili, one of the 13 barangays in the municipality of Almeria, was already completed.

Meanwhile, Mayor Agajan said that aside from the FMR projects, LGU-Almeria is currently undertaking a river control project right at the river that runs across the poblacion.

Due to the continuous rains in the past weeks of March this year, said river overflowed slightly, affecting the residents living near the river bank.

“To avoid repeating the incident, I decided to put up a river control project,” he said.

He bared, the river control project has a length of 28 meters costing some P28,000.00, which he expects to be completed soon. (PIA-Biliran) 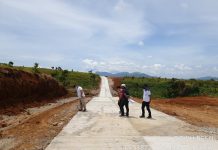