NAVAL, Biliran – In order to get updates of the World Health Oraganization (WHO) –Bill and Melinda Gates Foundation (BMGF) Rabies Project in the province of Biliran, the members of the Provincial Rabies and Prevention and Control Committee attended a forum on Tuesday, at the Naval State University (NSU) Hostel in Naval, Biliran.

The forum was also aimed at discussing steps and activities for the total eradication of the human and animal rabies in the province where Biliran is one of the provinces in the Visayas under the WHO-BMGF Rabies-Free Visayas Island Program.

The speakers during the forum came from Tacloban City in the persons of Dr. Anthea Naputo, Senior Agriculturist of the Department of Agriculture (DA) regional office, Dr. Marie Flor Elona, Medical Rabies Coordinator of the Department of Health (DOH) regional office 8 in Candahug, Palo, Leyte and Elaine Joy Villarosa also of the DOH 8 who is also a staff of the BMGF Rabies-Free Visayas Island Program.

Part of the discussions during the forum were on Republic Act 9482 or the Anti-Rabies Act of 2007, An Act of Providing for the Control and Elimination of Human and Animal Rabies Prescribing Penalties for Violation Thereof and Appropriating Funds Therefor.

The sections and provisions of RA 9482 were discussed in details by Dr. Naputo.

She said that having dogs as pet, entails a lot of responsibilities saying that it’s not only a matter of having pets but along with it are certain responsibilities that dog owners have to follow.

She urged dog lovers to be responsible pet owners.

“Part of our responsibilities as dog owners is to give our dogs enough food, tender loving care and most of all, we must submit our dogs for regular vaccination so that they will not be affected with the dreaded disease called “rabies”.

Likewise, she urged every dog owner to submit their dogs aged three months old and above for anti-rabies vaccination every year.

In her report, as Provincial Rabies Coordinator of Biliran Provincial Health Office, Lorna Jadulco, a nurse and a dog lover who has 10 dogs of various breed at home, said that for two and a half years now, since January, 2009 until July, 2011 there were no reported rabies cases in Biliran.

She said that if within a five-year period until 2013, there are no reported cases of rabies in the area, then Biliran can be declared as a Rabies-free province under the WHO-BMGF Rabies-Free Visayas Island Program. (FEJ/PIA 8 Biliran) 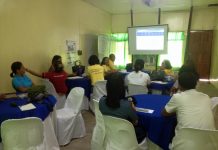 PRPCC calls for cooperation of barangay officials in dog vaccination