NAVAL, Biliran – Some 26 bags of fresh blood were donated by the Philippine National Police (PNP, Biliran Provincial Office led by Police Senior Superintendent Alfredo Sabornido during the blood letting on Thursday, October 6 which was conducted right at the provincial camp in Brgy. Larrazabal, Naval, Biliran.

This was revealed by Police Officer I Venus Abrigo of the PNP Biliran Police Community Relations in an interview with the Philippine Information Agency (PIA), Biliran Provincial Office.

She said, actually, there were more than 30 volunteer blood donors from the PNP provincial command including the 4th year Criminology students of the Naval State University (NSU) assigned in the unit as on-the-job trainees who submitted for screening before the actual extraction of blood, however, only 26 of them were found fit and qualified to donate blood.

Of the 26 volunteer blood donors, 16 were PNP men and 10 were criminology students.

The volunteer blood donors were examined by Dr. Fernando Montejo, Municipal Health Officer (MHO) of Naval, Biliran to ensure they were fit to donate blood.

The blood donors were also made to answer a three-page questionnaire to evaluate their qualifications to donate blood to be added to the stock of fresh blood of the Biliran Provincial Hospital blood bank.

The series of blood letting scheduled by the Rural Health Unit (RHU) of Naval has resumed starting today, October 6, after it was temporarily stopped due to the preparations of the Naval fiesta in October 1, 2011.

In today’s blood letting which is a half-day affair only, PIA-Biliran, being one of the coordinating agencies to the activity could not join the group because the schedule was in conflict with the regular Kaiphan sa PIA forum which is held every Thursday.

The blood letting conducted by RHU-Naval is in line with the National Voluntary Blood Donation Program of the government carrying the theme “Dugo Mo, Buhay Ko”. (FJ/PIA 8 Biliran) 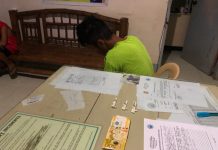