Sister Linda Lanigao, a convenor of the Biliran-Kawsa said tha four journalists who are members of the Probe Team,, an investigative documentary programhosted by Che-che Lazaro, are here in Biliran province to conduct an investigative report on the alleged 2010 election fraud. The members of the Probe Team went as far as Culaba, Kawayan, Almeria and now in Naval in relation to their investigative report on the 2010 election fraud. The activity is spearheaded by Biliran-Kawsa. 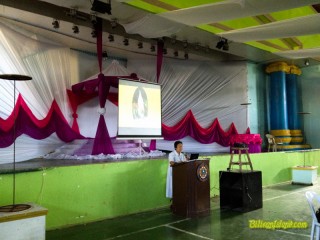 The activity at the NSU gym was attended by thousands of Biliranons coming from the eight municipalities of the province. Sister Carmen Eamiguel is now talking in the podium giving updates on the 2010 election protest.

Sister Carmen Eamiguel presented to the public the chronological event on the process and what is its status at present on the election protest of Atty. Glenn Chong vs Rogelio Espina. She also presented the observed election irregularities that happened during the May 10, 2010 elections in Biliran province. The election irregularitiesin Biliran province was presented by Sister Carmen Eamiguel in several fora at the national level including the inquiry of the committee on electoral reforms chaired by Sen. Koko Pimentel in the senate.

She revealed that there were 26 thousand Biliranons who signed the petition for the electoral protest of Atty. Glenn Chong vs Rogelio Espina in the Houseof Representative Electoral Tribunal (HRET).

Sister Carmen Eamiguel said in closing that it is not a matter of who the winner will be but it is for the sake of truth and justice.

She reported that there were six envelopes containing ballots found to be left in the municipality of Kawayan and discrepancies in the results found out by HRET investigators. 36 BEI’s and eight election officers were called by HRET for an investigation. She also disclosed that somebody asked her of what will she felt if the electhon protest will be handed by HRET on Jan. 21, 2013. The people who are present in the forum are one saying that they will hold ‘people power’ if the decision is not favorable with the electinm protest of Atty. Glenn Chong. The investigative documentary report of ABS-CBN’s Probe Team on the 2010 Biliran election protest will be aired on Jan. 20, 2013 after the Gandang Gabi Vice. A day after the HRET will convene with the foresight that the tribunal will hand the decision. Boy Galicia of Biliran Kawsa informed the public of the sad fate of the 36 BEI’s and the eight election officers during the investigation conducted by HRET. He added that a lawyer of the Espina camp jestly said “marami palang kalokuhang nangyari”. He also observed that some of the BEI’s and election officers were sad and some were crying after going out of the room where the investigation was held.

Atty. Glenn Chong relayed his message thru text tha he could not attend the forum at the NSU gym for he is preparing documents to be presented during hisappearance in the CBCP meeting scheduled on Jan. 27, 2013. Chong will be presemting to the bishops the Biliran election fraud case.

Sister Carmen Eamiguel read the letter sent to House Speaker Feliciano Belmonte asking for truth, justice and fairness in handing the decision on the 2010 Biliran electoral case. A letter-reply from the chief of staff of Speaker Belmonte was sent back to Sister Carmen assuring the integrity, fairness andno political intervention of whatever decision that HRET will arrive at in the instant case.