NAVAL, Biliran February – Despite the normal and manageable peace and order situation and no reported election-related incident nor presence of armed group are monitored in the province of Biliran, police authority in the province has already set security preparations for the upcoming May 13, 2013 national and local elections.

In a report from the Biliran Provincial Police Office (BPPO) presented by PSupt. Mateo B. Macale, chief of the BPPO police community relations division, in the general conference of Comelec deputies held at the Audio Visual Room of the Naval State University on February 15, four major security preparations are being laid down to achieve a safe and fair (SAFE) 2013 elections.

Part of the security preparations is the holding of conferences on election security planning where liasoning with the Comelec provincial office will be constantly made, whose contact person is PSI Nonito G. Zuasula with contact number 09299700831.

Another security preparation is the conduct of Comelec checkpoints in consonance with the implementation of IMPLAN to LOI 20/2012 “SAFE 2013 WARAY” where round the clock establishment of checkpoints in strategic locations and campaign against loose firearms “Bilang Kontra Boga” and partisan armed groups (PAGs) are intensified.

The sustainability and the strengthening of enforcement in the implementation of the police integrated patrol system (PIPS) is also a part of the security preparations of the BPPO in connection to the conduct of the May 13, 2013 elections.

Meanwhile, PNP-BPPO director Diloy informed that the BPPO has now intensified its campaign on the registration of loose firearms in the province of Biliran and conducted inventory on prisoners in the provincial and municipal jails in the province as they received unconfirmed report that some prisoners are used by politicians. (PIA-Biliran) 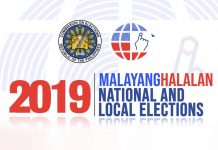