However, Bernardes denied the accusations of the city loop jeepney operators and drivers and said the charges are the handiwork of a former LTFRB official also involved in bribery in the past.

In radio interviews, Bernardes claimed he is introducing reforms to streamline the operations at the LTFRB regional office, which the complainants see as contrary to their needs
.
A joint complain affidavit signed on June 18, Iclajoda President Raymundo Parcon and Secretary Rizalito Alido said in a sworn statement that Bernardes has been receiving and demanding for money for individual applicants of taxi and public utility jeepney (PUJ) franchise.

A total of 15 organizations under Iclajoda signed a complaint dated June 17 against Bernardes seeking the Ombudsman Visayas for preventive suspension against the LTFRB official and to start criminal investigation proceedings without prejudice to the filing of other and separate administrative charges against Bernardes.

Parcon and Alido claimed that “even application for extension of route by the city loop transport groups will not be approved by Bernardes without payment of an amount and such is considered as an ‘SOP’ demand which is a clear form of illegal collection tantamount to outright bribery if not absolute extortion.”

The Iclajoda officials said that the LTFRB national office has already issued Memorandum Circular 2011-016 for the revocation of Memorandum Circular 2011-005-A entitled “Acceptance of applications for issuance of 350 new certificates of public convenience [CPC] to fill up the vacant slots of taxi units caused by non-extension of expired CPCs, abandoned or cancelled CPCs and dripped units without substitution in Region 6.”

Despite the moratorium on the issuance of new franchises for taxi and PUJ, Bernardes continues to release new franchises, which in effect, adversely affected the income of drivers and small transport operators.
Both said that Bernrdes issued an additional 350 taxi franchise for Iloilo, 180 in Bacolod and 50 additional PUJ franchise for Iloilo on top of the already existing 2,800 taxi units and more than 5,000 PUJs in Iloilo City. 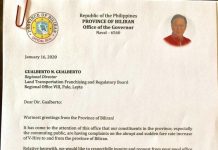