Atty. Japson reminds candidates to completely fill in their COCs and to comply the requirements to avoid being disqualified from running in the October 28, 2013 Barangay Elections.

Candidates are also advised to honestly fill in their COCs as third parties may file a protest against them based on material misrepresentation.

A day after the last day of filing of COCs on October 17, campaign period immediately starts on October 18 and to last until October 26. 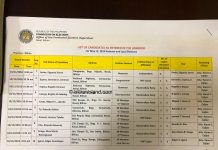 Who is running in Biliran | 2016 Elections