NAVAL, Biliran – A key official of the office of the Department and Industry (DTI) in Biliran province revealed that complaint on electronic products topped among the consumers in the province.

This was revealed by Engr. Jorge Modesto, senior trade and industry development specialist of DTI-Biliran during the PIA Kapihan at Pulong-Pulong ng Bayan on Thursday, October 24, 2013 live over Radyo Natin- Naval.

Modesto informed that complaint of consumers on defective electronic products topped the number of complaint cases filed by consumers in their office.

“A consumer should use one of the eight basic rights which is the right to information to be able to make the best choice based on the correct and full information about the product” Modesto said.

He emphasized that a consumer can also invoke the three R’s which is replace, repair and refund if the product bought or service rendered is defective including the filing of appropriate complaint to DTI which is the consumer’s right to redress.

Business establishments should also take into consideration the welfare of the consumers to avoid problem to crop up or losses in the course of doing business like confiscation of the product complained of, Modesto further informed. 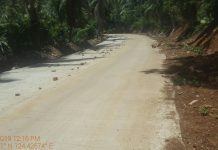