Less than 24 hours after their gas exposure, Armand Licup, (Geologist), Noland Maceda (Reservoir Engineer), and Porsteinn Sigmarsson (Icelandic Consultant) are fully recovered as they attended the regular BGI Reservoir Meeting. According to BGI, other affected personnel Johannes Porarinsson (Deputy Resident Engineer) and Lee Marvin Moran (Safety Supervisor) are in Ormoc Doctors Hospital. They are accordingly scheduled to be discharged soon. Kevin Hasler (Safety Consultant) and Rhoey Romero (Safety Officer), on the other hand, are in Chong Hua hospital in Cebu for further observation. Rhoey Romero is in a stable condition and is responding very well as per Dr. Jet Solite of the Biliran Provincial Hospital who accompanied the patients in Cebu. Update: At 11 am today, BGI will give official statement over 103.9 Radyo Natin FM regarding the gas leak incident at their drilling site yesterday. There is also live streaming of the BGI report at Radyo Natin at biliranisland.com

Eight workers of the Biliran Geothermal, Incorporated (BGI) who were at the drilling site in Sitio Pulang yuta, Brgy. Cabibihan, Caibiran in the province of Biliran collapsed after they allegedly inhale gas that made breathing difficult. BGI in its statement released to BiliranIsland.com said, “Initial investigation shows that H2S was controlled and it was an ammonia-like gas that caused the drowsiness of the staff. There was no serious injury and the situation is stable already. Once the investigation is complete we will release details of the incident.”

The victims were rushed to the Biliran Provincial Hospital in Naval, Biliran for emergency treatment. Two of the victims were airlifted at 6:15 pm by a private helicopter direct to Cebu while one victim was brought to Ormoc by the BPH ambulance since he can no longer be accommodate in the chopper. The three victims will be treated in a private hospital in Cebu City. BGI further said that they will release the official statement about the incident tomorrow, Friday, June 20, 2014. 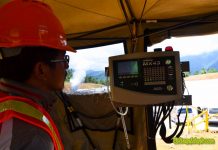