NAVAL, Biliran (PIA)- The provincial offices of the Philippine Information Agency (PIA) and the Department of Environment and Natural Resources (DENR) in Biliran formally launched the Climate Change Advocacy Campaign on July 18, 2014.

The ultimate objective of the advocacy campaign is to heighten public awareness on climate change, its effects to the environment and ways to adapt and mitigate it.

The nationwide advocacy campaign which ends in December this year is carried out through the conduct of various information dissemination activities like fora at the grassroots level, target audience of which, include people in the community especially the youth sector, students in the secondary level and other concerned groups in Biliran province; information dissemination on climate change through print and broadcast news releases; and through the regular radio program of PIA-Biliran dubbed as “Kapihan at Pulong ng Bayan” with resource persons from the Department of Environment and Natural Resources (DENR) who are invited to discuss about climate change issues and related topics.

The kick-off activity of the climate change advocacy campaign in the province of Biliran which started on July 18, 2014 include the hanging of streamer in a conspicuous place in Naval, the capital town of Biliran province; conduct of the radio program with BerlinaCorson, information officer-designate of DENR-Biliran as guest; and the conduct of students forum at the Naval School of Fisheries (NSF) with some 600 third and fourth year high school students in attendance.

Meanwhile, Judy Ann Cadano, 15 year old and a third year high school Linnaeus section student under the special science class (SSC) of NSF, said that she was happy with NSF as the first school where the forum on climate change was conducted because it add their knowledge on climate change learned from their science teachers.

“Hope the forum would enlighten the young people and from then they could draw actions which could help minimize the effects of climate change” the 15-year old girl added with reference to the recent destructive typhoons that did not spare the province of Biliran.

For her part, AillenBorja, another student of the SSC of NSF, also said, it would be better for young people to put into action what they have learned from the forum on climate change.

The young girl further said that the youth can make a big difference in helping the effects of climate even in their own little way like the observance of proper waste management. (PIA 8 Biliran) 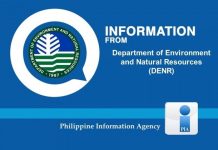