NAVAL, Biliran (PIA)- A composite inspection team from the central office of the National Food Authority (NFA) will visit anytime this month of August, 2014 in Biliran province including the towns of Leyte-Leyte and Calubian in Leyte province which are part of the coverage area of NFA-Biliran.

This was revealed by Lorna S. Ordiz, Officer-in-Charge of NFA-Biliran in an interview.

The visits to the NFA provincial offices nationwide by the NFA composite inspection team is mandated by Arthur Juan, the new NFA administrator, to find out if NFA accredited retailers including businesses involved in grain trading have strictly followed and have not violated the provisions of the National Grains Act, Ordiz further said.

Reports revealed that several warehouses in some areas in Luzon that were found to have been hoarding commercial rice, adulterated NFA rice and committed other violations of the National Grains law were raided by the NFA composite inspection team which is composed of the Criminal Investigation and Detection Group (CIDG) and other law enforcement agencies of the government.

“The volume of rice shipment is part of the move of NFA to flood the market with affordable and quality NFA rice to contain the rise in the prices of commercial rice sold in the market”, she added.

At present, NFA rice of good quality at P32 per kilo and NFA regular rice at P27 per kilo are sold to consumers at NFA accredited retailers nationwide. (PIA 8 Biliran) 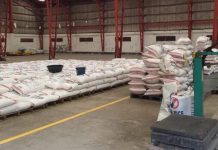 NFA-Biliran has enough supply of rice