Biliran Province- According to the report as of December 10, 2014, released by the Provincial Risk Reduction and Management Council headed by Sofronio Dacillo together with Flordeliza G. Trani of the Department of Social Welfare and Development, over 55,564,708.97 pesos estimated amount damages was brought by the recent devastation of the Typhoon Ruby in 132 barangays covering the eight (8) municipalities of Biliran.

The amount covers the destruction in the aspect of infrastructure, crops/fishery/livestock, electrical, NFA, hospital, private properties and others.

As of December 7, 2014 morning, the 54,107 evacuees are confirmed had returned home after their temporary residence in over 384 evacuation centre after the the province was placed under signal number 3 last December 6, 2014 where the whole province experienced strong winds and intense rain that affected the lives and properties of the constituents.

Due also of the said typhoon, various problems arise such as scarcity of food supplies and basic commodities. The aftermath of the last year’s typhoon Yolanda which are still unadressed was aggravated more by the Typhoon Ruby hence the need for shelter assistance is at it’s highest demand especially those residing at the coastal areas. 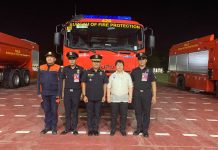