The coverage of the fire on the Romualdez yacht in the sea off Culaba, Biliran last January 21 was most challenging for biliranisland.com, which broke the news to the world and for which I act as volunteer coordinator of the information traffic for unfolding events like this.

The story was simple enough: A boat caught fire at sea and emitted a huge column of smoke skyward. Photos were taken by alerted residents with gadgets and posted on Instagram. The next set of information was about the arrival of the boat’s crew in Culaba. They were rescued by local fishermen and brought to the Rural Health Unit and given food, a change of clothing, and necessary accommodation. Of course, they were asked their names, which were written on paper, and asked routine info about the burning boat, its owners, etc. The data were relayed thru official channels to the Biliran PDRRMC.

The sh_t suddenly hit the fan within minutes after the website posted the breaking news item about the burning yacht. The webmaster received intense pressure and representation to alter the name of the posted owner of the burning luxury vehicle, sufficient enough for him to buckle under pressure and post an erratum that the boat was owned by the brother of the stated owner. But other concerned followers soon disputed the erratum item and convincingly argued the veracity of the initially posted name. This dynamic somewhat delayed the posting of the next set of information: the names of the rescued crew members, that they were safe and in good hands. This was for the peace of mind of their friends and families. The alleged cause of the fire was also posted.

Not long after this piece of info came out online, a helicopter arrived in Culaba and pulled out the rescued crew members. Locals in the know identified the chopper as belonging to Leyte First District Representative Ferdinand Martin Romualdez. A good number of them took pictures of the chopper and posted these on their Facebook accounts.

A number of mainstream media outfits – a newspaper and TV stations – caught the breaking news and posted initial reports about it in their websites. They carried the initial info posted by biliranisland.com, just like what they did with other news stories of national significance that the site broke in the past. But by mid-evening, the online items in a major newspaper and a TV station had been pulled out from their websites.

We realized by then that this incident was being subjected to a news blackout by interested parties. But we already suspected this scenario when a chopper was used to retrieve the rescued crew from Culaba.

The website and its reporters were apparently being closely watched, and the legit sources of their info given warning, such that one official thereafter refused to be quoted for info about the incident. The “suppress this news” managers certainly did their best to trivialize the event and make the website operators look like fools and liars.

But we have been in the Biliran scene long enough, and we did not run out of independent sources of info that we sought in the reportage.

On January 22, the news suppressors made one last attempt to contain the viral effects of the website coverage. When Marlon Mecaral and companions hopped into a boat and tried to travel towards the burned boat at sea to take pictures and video, they were harangued and prevented from sailing by people in a speedboat, who introduced themselves as Coast Guard operatives. They were not, and there was no Signal No. 1 to prevent such act. They were the only ones singled out for this harassing act. Again, part of the agenda to suppress the news.

Marlon and company did not insist and just allowed the trampling of their reporters’ rights. But just the same, they got the video images that they wanted on land, courtesy of local fishermen who had approached the burning boat the day before and shared these for the website audience.

One of our greatest discoveries from this incident, which the news suppressors also completely overlooked, was that fishermen nowadays carry cellphones and can take good videos out at sea. “Pa puropangisda lang ni ‘bay, pero di-ipod kini.” And they can be articulate eyewitnesses, and they provided the reporters with some damning observations.

One of the videos taken, which was shared to the website, showed the burning yacht with two helicopters hovering around. There were a number of bancas with riders not far from the boat, and the video caught a joke from one that mentioned about “looting.”

The interviewed fishermen said no looting happened on the boat, because the people on the helicopters were on the watch. Soon, two people jumped from the choppers and climbed up the abandoned burning boat. Some fishermen were of the opinion that the fire could have been contained, and were in the vicinity waiting to be of help. This stated concern was even caught in one video. But the informants said the chopper jumpers allegedly told them they had instructions to allow the boat to burn, and that the fishermen’s help was not needed.

And so what happened had happened, but with a complete set of evidence that the news suppressors wished did not exist, and certainly not documented and published online. 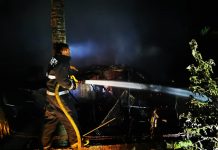