by Aaron B. Recuenco
Manila Bulletin

Naval, Biliran— Governor Gerardo Espina, Jr. has vowed to make administration standard bearer Mar Roxas win here as a payback for what he described as an outpouring of projects in the province.


In an interview, Espina said various projects, particularly road repairs and widening and construction of bridges under the Aquino administration have surpassed all the government projects that were given to Biliran in the post-EDSA administrations combined.
“From infrastructures to non-infrastructures like the Conditional Cash Transfer and Philhealth, every person in Biliran could attest that the projects and programs from the national government are seen and felt,” Espina told the Manila Bulletin in an interview here.

“And this is unusual because not only is Biliran a small province with a small voting population, President Aquino and Mar Roxas lost here during the 2010 elections,” he stressed.

Espina admitted that he and the rest of local officials carried Villar during the 2010 elections.

“If we did that for Manny Villar, I do not see any reason why we could not do it for Mar Roxas,” said Espina.

He added that Biliran is just one of the three provinces where Villar got the most votes.

But Espina was quick to clarify that their all-out support is not about Roxas but for the continuity of the projects and programs, which he said, were felt by his constituents.

“It was already proven that national government support system was delivered to Biliran so why look for someone else?” he said.

In his speech before local officials here, Roxas, for his part, assured them that Biliran will get some P100 million every year if he is elected.

The monetary promise was based on what he calls “Walang Iwanan Fund” where each town will receive an annual fund from the national government equivalent to its population—which is P1,000 per person.

“The town of Naval has more than 40,000 population. That means it will be receiving P40 million every year from the national government on top of its IRA (Internal Revenue Allotment),” said Roxas.

But he was quick to clarify that the fund will not be distributed to the people but will be in the form of programs and projects which the local population would suggest. The fund will be supervised by local officials but will be monitored by representatives from various local sectors which include the local parish priest.

The province of Biliran has more than 100,000 registered voters. 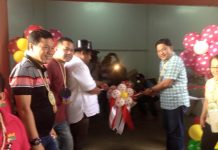