NAVAL, Biliran (PIA) – Although it is still approximately one year before the annual regional sports event in Eastern Visayas, the key officials of Biliran province, the host of Eastern Visayas Regional Athletic Association (EVRAA) Meet in January, 2017 and the Department of Education (DepEd), Division of Biliran are already in the thick of preparations.

“The personnel of the Biliran provincial engineering office have already surveyed the other day (January 7) the present conditions of the facilities of the Biliran Sports Complex including the Olympic-size swimming pool located in Barangay Larrazabal, this town”, Francisco L. Bayon-on, Jr., division sports coordinator of DepEd-Biliran revealed in an interview.

Bayon-on reported that the track oval of the Biliran Sports Complex will most likely be rehabilitated with options to have it rubberized or improved into its useful state depending on the availability of funds.

“We also include among the priority plan, the billeting of the participating delegations of the 13 DepEd division delegations composed of 10,000 individuals not to include the guests and visitors,” he emphasized.

He said that they have already identified 14 schools with 20 classrooms each in the towns of Naval and Almeria that can accommodate such big numbers that will come and stay for a week in Biliran province.

DepEd-Biliran will also coordinate with the local officials of the different local government units in Biliran province and other concerned government agencies especially in Naval and Almeria towns as to the preparations of the EVRAA Meet to attain peaceful, orderly and successful conduct of the sports event in the province, he said.

Bayonon added that DepEd-Division of Biliran will also conduct training of its personnel in officiating and coaching as this is a vital component in the successful conduct of the annual sports event.

A series of convergence meetings with LGUs, concerned government agencies and other stakeholders will be conducted starting this month onwards to achieve a smooth holding of the event.

DepEd-Biliran and the provincial officials will attend the 2016 EVRAA Meet in Ormoc City on January 31 to February 6, 2016 for the purpose of benchmarking and apply the things they actually observe during the weeklong sports event. The observations will also be applied in the preparations of Biliran’s hosting of the event, he added.

For his part, Biliran Governor Gerardo J. Espina, Jr. said in an earlier interview in his office that he is now setting his top priority, this early, in the preparations of the hosting of Biliran province of EVRAA Meet in 2017.

It may be recalled that Biliran province has already hosted this big event in the Eastern Visayas region, some 22 years ago during the time of former Governor Wayne M. Jaro. # (PIA 8 Biliran) DepEd suspends all students’ events due to coronavirus 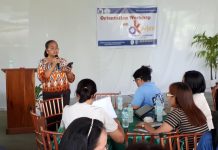