NAVAL, Biliran – A 44-year-old tricycle driver was arrested by police at the Naval town hall after he was found out carrying a 38 caliber pistol and 13 live ammunitions.

Solomon Paghid, a resident of Barangay Catmon, Naval, Biliran was arrested on Tuesday, March 22, 2016 at around 12 noon at the town hall located in Barangay P.I. Garcia, Naval, Biliran. 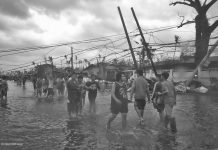