NAVAL, Biliran – The province of Biliran marked its 24th Provincehood Anniversary in May 11 (Wednesday) 2016.

In an interview, Biliran Governor Gerardo “Gerryboy” Espina, Jr. said, the celebration this year was made simple because of its closeness to the date of the May 9, 2016 elections where everyone is involved in the political exercise.

A simple thanksgiving mass was held at the compound of the governor’s hall at the capitol compound to highlight the occasion.

The mass which was celebrated by Fr. Romulo Espina of the Our Lady of the Holy Rosary in Naval, Biliran was attended by the capitol employees and officials of the provincial government led by Governor Espina, Jr. afterwhich, a simple lunch was served at the governor’s office for everyone to partake.

He informed that the province of Biliran province will be celebrating the silver provincehood anniversary in May 11 next year.

Since it’s a milestone in the history of Biliran province, he is planning to line-up activities that will give color and attraction to the occasion.

When asked about holding the festivals of some municipalities in the province during the silver provincehood anniversary next year, he said, he has to consider factors in undertaking said activities as the province of Biliran is facing a big task, that of hosting the January, 2017 Eastern Visayas Regional Athletic Association (EVRAA) Meet.

Expected to present their festivals are the municipalities of Almeria, Cabucgayan, Caibiran and Biliran, among others.

It was learned that the provincial government of Biliran is spearheading the refurbishing and repair of the Biliran Provincial Sports Center in Brgy. Larrazabal, Naval in preparation for the hosting of the big sports event.

Part of the preparations is the repair of the olympic size swimming pool located within the sports center.

May 11 of every year is declared a local holiday in the entire province of Biliran to give every Biliranon time to enjoy and internalize the significance of the occasion.

In May 11, 1992 during the synchronized local and national elections, a plebiscite was conducted to ratify the approval of the conversion of the sub-province of Biliran into a regular province pursuant to Section 462 of Republic Act No. 71609 and in May 21, 1992, the members of the Plebiscite Board of Canvassers proclaimed the conversion of the independent province known as the Province of Biliran by unanimous vote. # (PIA 8 Biliran) 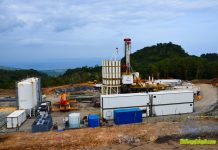