Naval, Biliran – A pregnant housewife died after being hit by a XRM 110 motorbike along the national road of Brgy. Agpangi, Naval, Biliran.

The pedestrian identified as Nora Antonio Delos Santos, 35-year old housewife and a resident of Sitio Anas, Brgy. Atipolo, Naval, Biliran was hit after trying to cross the national road last July 10, 2016 at around 7:40 in the evening.

The victim was immediately brought to the Biliran Provincial hospital for medical treatment but died due to serious head injury as declared by the attending physician.

The victim is survived by his husband and ten children. 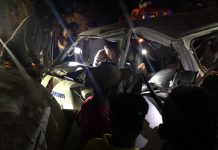