This unlawful activity was immediately intercepted by the joint seaborne operation of BFAR-8 FLE together with Bantay Dagat, Philippine National Police and Philippine Coast Guard in the area.

Also, according to the spot report released by the local PNP, the medium scale fishing vessel had encroached Sambawan Island, a declared Marine Protected Area (MPA) of Maripipi.

“BFAR is serious in its campaign against Illegal, Unreported and Unregulated Fishing (IUUF). We will do what is righteous and in accordance with the law. Violations will be served with appropriate actions”, he said.

Dir. Albaladejo also met with Maripipi Municipal Mayor Uldarico Macorol to further discuss on the apprehension of the said vessel.

He then directed to bring the vessel to capital town Naval, wherein fishing gear was unloaded for confiscation. A number of 20 municipal registered fisherfolks volunteered to help in transferring the bulky gear to truck vehicles that will transport it to the temporary custody of BFAR Biliran Office.

Municipal Agriculture Officer Limuel Antonio said that fisherfolks favored the apprehension of the fishing vessel. According to him, they have been complaining of the intrusion of commercial fishing vessels in the municipal fishing grounds resulting to less fish catch and even destruction of payaos (fish aggregating device) bouys, and other municipal fishing paraphernalias.

The captain, engineman and anyone in the fishing vessel involved in decision-making of the fishing activity will be charged for violating Section 95 Use of Active Gear in Municipal Waters, Bays and Other Fishery Management Areas; and Section 101 Fishing in Marine Protected Areas, Fishery Reserves, Refuge and Sanctuaries of the Republic Act 8550 otherwise known as the Philippine Fisheries Code of 1998 as amended by Republic Act 10654. 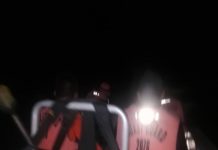 Half submerged motor banca off the coast of Naval rescued 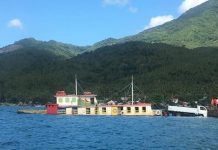