NAVAL, Biliran – Right from the horse’s mouth the message is loud and clear, the provincial office of the information arm of the government in this part of the country will receive more help and assistance from the top local government unit (LGU) officials in Biliran province.

The blessing of the new PIA-Biliran office was held on Tuesday, February 28, where it was also the first meeting of the CDIOs and IOs in the province of Biliran for 2017.

Governor Espina said that PIA will now stay in a permanent office where it used to transfer in different locations several times since it only rented an office space and later occupied a rent-free space – a school classroom, but vacated the area after it was taken back for use because of the school’s expanding student population.

The provincial government of Biliran through Governor Espina gave full financial support for the construction of the new PIA-Biliran office at the western side of the Naval Gymnasium building located at Icain Street in Naval town.

He also vowed to extend in any capacity the province can provide to some other needs of PIA- Biliran necessary for its efficient and effective delivery of information to the public down to the grassroots.

For his part, Naval Mayor Gerard Roger M. Espina, who also attended the blessing, said he will also give his full support to PIA-Biliran since the young mayor explained in brief the importance of information in the delivery of what he called “truth” in the reporting of government programs, projects and activities to the people.

Alicia E. Nicart, OIC Regional Director of PIA 8 who also the graced the occasion expressed her deep gratitude for the support extended by Biliran Governor Gerardo J. Espina, Jr. and that of his nephew, Naval Mayor Gerard Roger M. Espina to PIA-Biliran.

She said, words are not enough to thank the two local leaders and Congressman Rogelio Espina of the lone district of Biliran for their continued support to PIA-Biliran over the years.
The new PIA-Biliran office located within the Naval Gymnasium building was allocated by LGU-Naval during the mayorship of the late Gerardo S. Espina,Sr and was formally given to PIA through a Memorandum of Agreement (MOA) during the time of former Naval Mayor Susan V. Parilla. (ajc/FJ/rvictoria/PIA-Biliran) Feature: Bicycling for peace and order 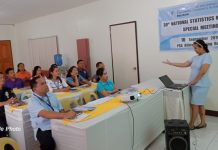