The badly damaged Caraycaray Bridge in Biliran during the onslaught of typhoon “Urduja” has been reopened to light vehicles, the Department of Public Works and Highways announced today.

However the DPWH said detailed plans and cost estimates are being prepared for the complete rehabilitation of the damaged bridge under the calamity fund.

It can be recalled that the Caraycaray Bridge located on Biliran-Naval Circumferential Road in Biliran province was closed to traffic after it collapsed on Dec. 16, 2017.

The bridge is among the major bridges linking Barangay Caraycaray to Naval town proper in Biliran.

DPWH has implemented backfilling and embankment works to serve as temporary passage for the public, allowing motorcycles to cross the bridge effective January 9 and tricycles and four-wheel vehicles starting January 11, Bollido said.

Heavy bags and cargoes inside light vehicles shall be unloaded first when crossing the bridge to prevent further damage on the bridge.

The agency said in case of heavy rainfall warning in the area is released from the weather state bureau, Caraycaray Bridge will also be closed. 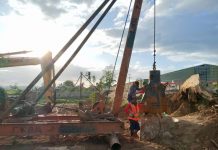