The storm devastated the island-province and left 42 people dead and 14 missing.

He said the national government also has to earmark funds for flood control and the rechanneling of rivers in the province. 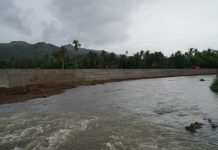