Shellfish ban is up in the coastal waters of Biliran province as the Bureau of Fisheries and Aquatic Resources (BFAR) noted a high level of red tide toxin levels in both seawater and shellfish meat.

All the eight towns in Biliran province are coastal areas with a big population dependent on fishing and shellfish collection as their source of living.

Based on samples collected by the fisheries bureau, level of red tide toxins is above the regulatory limit, said Nancy Dayap, manager of BFAR regional fisheries laboratory, in a phone interview Saturday.

Local government units are advised to regulate gathering, marketing and transporting of shellfish in affected areas.

Based on the Shellfish Bulletin No. 7 dated March 2, 2018, “all types of shellfish and Acetes sp. or alamang gathered from the coastal waters of Biliran are not safe for human consumption”.

In December 2016, shellfish poisoning has killed an old man and hospitalized several of his neighbors in Naval, Biliran.

Aside from Biliran, the fisheries bureau in Eastern Visayas earlier imposed a shellfish ban in Carigara bay, coastal waters of Leyte, and Irongirong bay in Samar.

The recent spate of red tide phenomenon in the region started in July 2017 and gradually expanded to nearby bays.

The fisheries bureau had set up checkpoints in strategic area to prevent entry of shellfish gathered in affected bays.

Fish, squid, shrimp and crab are safe to eat “provided that they are fresh and washed thoroughly and internal organs such as gills and intestines are removed before cooking,” BFAR said.

Red tide is a term used to describe a phenomenon where the water is discolored by high algal biomass or the concentration of algae.

The discoloration may not necessarily be red in color, but it may also appear yellow, brown, green, blue or milky, depending on the organisms involved. 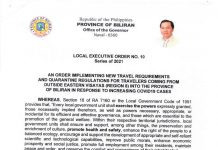