Bueno’s first visit to the province aims to familiarize the road sections and to know the status of projects implemented by DPWH Biliran District Engineering Office (DEO).

“Because I’m not from Region VIII, maganda rin yung may nakaka-interact ako because I know the place. I may not be master of this place but at least may idea ako dito sa utak ko,” said Bueno.
Bueno’s inspection was accompanied by District Engineer David P. Adongay Jr. and Assistant District Engineer Alfredo L. Bollido with section chiefs and Project Engineers (PEs) of the DEO together with Engr. Adelina P. Gomez, Engr. Angelita Obediencia, Ms. Annalyn Mabolo and Ms. Veticia A. Tabafunda, all from DPWH Regional Office VIII.

Among the projects inspected are the on-going road widening at Biliran to Naval section and on-going construction of slope protection structure along Naval-Caibiran Cross Country Road (NCCR) and projects along Biliran Circumferential Road (BCR).

Adongay commits to Bueno to finish these on-going 2018 projects on June, 2019.
Aside from the district implemented projects, Bueno also inspects projects implemented by the Regional Office within the Province.

Meanwhile, the Regional Director also takes time to visit the office of DPWH-Biliran DEO. According to her, the visit to Biliran is not just to know the culture of the province, but also to know the people and the culture within the office. This includes the managerial styles of the heads of offices with regards to district’s ranking and performance. 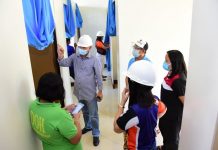