The Assistant District Engineer of DPWH-Biliran District Engineering Office (DEO) clarified issues surrounding the damaged of Caraycaray detour/spillway and their solution to immediately restore the said detour during his radio guesting at Sibya sa Probinsya Program at Radyo Natin FM on August 28, 2019.

According to Bollido, DPWH has already coordinated with the contractor and has come up with a solution to restore the said detour/ spillway effectively and efficiently.

“Steel I-beam will be used to restore the spillway/detour along the river with a length of 20meters,” Bollido said.

Bollido revealed that the idea was suggested by Engr. Nilo Saavedra, Project Engineer of JFAP Baltonado Construction-the Contractor for the Repair of Caraycaray Bridge project.

“To make the structure sturdy, steel sheet piles will be driven on each side of the steel I-beam for support,” he added.

The I Steel Bar or I-Beam is another term for the wide flange since it resembles the shape of the letter I. It is popular for its superior quality and is very effective in proving support to structures.

Bollido also added that a proposal to use a box culvert was also taken for consideration, however, although it is durable, the construction would take longer which will prolong the burden of heavy equipment and vehicles with heavy load to travel about two hours from Biliran-Cabucgayan-Caibiran-Cross Country Road in going to Naval and vice-versa.

“The restoration can start anytime soon once the weather is good and the materials are available, which is to be provided by the contractor,” Bollido said.

DPWH-Biliran DEO targets to make the detour passable again before the Naval town fiesta which falls on the 1st week of October.

The detour/ spillway in Caraycaray river was cut off by floodwaters due to heavy rains on August 26, 2019 during the onslaught of typhoon “Jenny”.

The district office has already posted an advisory for heavy equipment and vehicles with heavy load to take Biliran-Cabucgayan-Caibiran-Cross Country Road in going to and from Naval-Tacloban and other parts in Eastern Visayas.

The detour/spillway along Caraycaray river serves as a detour for heavy equipment and vehicles with heavy load and soon for all type of vehicles once the construction/replacement of Caraycaray bridge starts.

David P. Adongay Jr., District Engineer said that the replacement for Caraycaray Bridge was already bid out and will be implemented by the DPWH Regional Office VIII by September this year.

“As of now, DPWH-Biliran District Engineering is already coordinating with the contractor for the immediate repair of the recently damaged detour, considering that the repair of the bridge itself is to be started soonest, so that transportation to and from Naval can return to normal,” said Adongay. 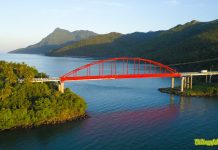