CAIBIRAN, Biliran – An alleged security personnel of a local politician was arrested Wednesday, January 8, for violation of illegal possession of firearms and ammunitions. Monsales was arrested by virtue of Search Warrant No. 20-15 issued by RTC Branch 37 Presiding Judge Conatantino F. Esber on January 7, 2020 for violation of Sec
28 (a) of RA 10591 (Illegal Possession of Firearms and Ammunitions). Monsales admitted in an interview after his arrest this morning, that the alleged goons nabbed by Culaba police in a checkpoint in Barangay Bool West on May 8, 2019 in possession of several firearms, bladed weapons and ammunitions, were also allegedly personnel of the local politician he served. 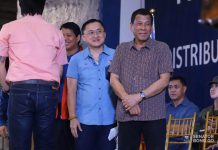