PCSO Board Member Sandra Cam gave the checks amounting to a total of P15 million to the officials of Northern Samar, Eastern Samar, Samar, Biliran, and Tacloban City last January 3. 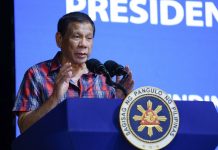