Biliran, Biliran— A hardware worker succumbed after the single motorcycle he was driving hit a stray dog about 11:10 at night on Wednesday (July 22) along the National Highway in Brgy. Burabod here.

Biliran Chief of Police Capt. Romeo Sudario identified the victim as Butz Lumagbas y Duran, 29, married, an employee of City Hardware in the capital town of Naval and a resident of Brgy. San Roque here. Case investigator Police Staff Sergeant Franklyng Queipo in a telephone interview disclosed that the victim, who was driving a Honda XRM 125 with no plate number, was on his way home to this town coming from Naval, Biliran when the accident happened.

He said that while the victim was travelling along the National Highway at a fast pace when a stray dog suddenly crossed the road. The victim failed to control his driven vehicle to stop hitting the dog. The impact causes the driver to be thrown several meters away from his driven motorcycle and landed to the concrete road head first.

The collision also resulted in the death of the dog. A local rescue group immediately responded and brought the victim to the Biliran Provincial Hospital, but Dr. Albrecth Rico declared him as Dead on Arrival. The victim’s body was brought to a local funeral parlor in Naval, Biliran. – BiliranIsland.com 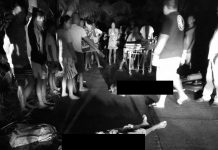