Cabucgayan, Biliran— A collision between two motorcycles while traversing opposite directions resulted in the death of one driver and the severely critical condition of the other around 5:20 p.m. on Friday (Dec 11) in Brgy. . Looc here. Initial investigation conducted by the local police disclosed that Arsenal was driving a Honda XRM color black with plate number 8468-HA and was traversing from Brgy. Julita, Biliran going to Cabucgayan, while the motorcycle driven by Quipo, a Kawasaki Rouser 135 color black, was in the opposite direction going to Biliran, Biliran. But upon reaching Brgy. Looc, Quipo encroached on the lane traversed by Arsenal resulting in the head-on collision. The two drivers were brought to the Biliran Provincial Hospital for treatment, but Arsenal was declared dead on arrival by attending Dr. Julieta Tan. Because of the severity of the injury of Quipo, the other driver, he was referred to the Eastern Visayas Regional Medical Center where he was brought there unconscious yesterday. – BiliranIsland.com 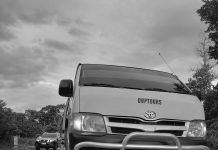 Cop and back rider died in road mishap