Naval, Biliran — The local police of this capital town of Biliran are conducting a thorough investigation over the identity of the suspect/suspects and the motive in the killing of a former barangay kagawad, who was shot to death in front of his house about 5:10 p.m. today (Jan 6) in Brgy. Larrazabal here. The police said they received a telephone call from a concerned citizen about 5:15 p.m. today, informing their station about an alleged shooting that occurred in Brgy. Larrazabal. The police said that upon arrival at the place, they found the victim lying on the middle of the road in front of his house bathed with blood.

Dr. Ralph Bueno, the Municipal Health Officer who went to the crime scene declared the victim as dead on the spot.

Initial investigation conducted by the local police disclosed that the victim had just arrived home after buying feeds for his livestock when he was shot by the unidentified person/s onboard a still unknown single motorcycle.

Residents in the area described the single motorcycle as a long standing vehicle like that of a dirt bike or Enduro bike. The suspect/s fled to an unknown direction after the shooting.

Residents in the area suspect that the killing was well planned because the suspect/s carried out the killing when local police manning the checkpoint of the barangay left this morning after a 14 day quarantine period.

The barangay was placed in a lockdown for 14 days and the lockdown was only lifted today.

The policemen left the checkpoint about 10:00 a.m. today.

The victim sustained gunshot wounds to his right back and right forehead that resulted in his instantaneous death. Police also recovered from the crime scene were two (2) empty shells of cal. 40.

A hot pursuit operation is still ongoing as of press time. – BiliranIsland.com 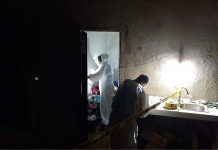