Naval, Biliran — An inmate facing rape charges languishing and at the Biliran Provincial Jail while waiting for the hearing of his case was reported to have escaped from the said jail facility about 12:45 in the morning today (Mar 26) at the Capitol Ground, Brgy Calumpang, Naval, Biliran. Naval police said that a certain Donabelle Cuevas, Jail Guard of Biliran Provincial Jail, called Naval MPS and reported that one of their Persons Deprived of Liberty (PDL) escaped from their custodial facility.

Major Astorga said that upon receiving the said report he immediately dispatched Police Corporals Cecile Ray Ceniza and Jerson Banghal and Pat. Jilton Lagado to conduct an investigation at the said jail facility.

Initial investigation conducted by the disclosed that the said escapee faces the crime of rape, and gained his exit by climbing the perimeter fence at the rear side of the building.

A manhunt operation is being conducted by the Naval, Biliran police for the possible arrest of the suspect. – BiliranIsland.com 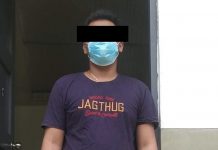