Biliran, Biliran—- An incumbent Sangguniang Kabataan Chairman of one of the municipalities of this province who has been hiding here after knowing that he is facing charges in his hometown was arrested about 11:30 in the morning yesterday (Aug. 24) in Sitio Puro, Barangay San Roque Biliran, Biliran.

Cabucgayan COP Police Lt. Teofilo Gervacio identified the accused as Edwin Arisgado, 25, single, SK Chairman, and a resident of Brgy. Langgao, Cabucgayan, Biliran. The accused was tagged by the police as the No. 4 Most Wanted Person in the Province of Biliran.

The accused was arrested by virtue of the Warrant of Arrest issued by Hon. Constantino F Esber, Presiding Judge, RTC, Eighth Judicial Region, Branch 37, Caibiran, Biliran dated January 15, 2020 under the Criminal Case No. CB-20-833 for the crime of rape with no bail bond recommended.

The charges stemmed from an incident that happened in the evening of July 10, 2019 when the accused allegedly went inside the room of the victim and committed the alleged rape. The live-in partner of the victim then filed charges of rape against the accused but withdrew the complaint weeks later by filing an affidavit of desistance. However, the victim filed again the charges thus a Warrant of Arrest was issued by the court since last year.

The accused was immediately brought to the issuing court for presentation of his arrest and later brought to the Cabucgayan Municipal Station for his detention. – BiliranIsland.com 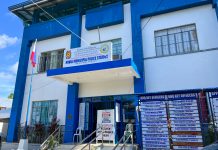