The police said that a concerned citizen personally appeared to Cabucgayan Police Station informing that there was a vehicular accident that transpired at the national road in Brgy. Looc and one of the persons involved were already rushed to Cabucgayan Rural Health Unit for medical treatment from the slight injuries he incurred. The police immediately responded and upon arrival in the area saw a man lying on the pavement and apparently unconscious who happens to be the driver of the other vehicle.

Initial investigation conducted by the responding police disclosed that Lamoste was driving a Honda RS 125 color black and green, with no plate number and no OR and CR presented, while the other driver Trani was driving a Honda XRM 125 color black and white, with still no plate number and no OR and CR presented. The police said that both vehicles were traversing along the national road in an opposite direction but, upon reaching at said place of incident the two vehicles figured in a head on collision which resulted in the injuries of the two drivers and damage to their driven motorcycles. Lamoste was immediately brought by residents in the area to the Municipal Rural Health Unit for slight injuries while Trani was taken to the Biliran Provincial Hospital and because of the severity of his injury that involves a broken leg, he was referred to the EVRMC hospital in Tacloban City. The two motor vehicles involved were brought to Cabucgayan MPS for proper disposition and documentation. 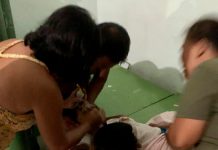