Kawayan, Biliran— A fisherman is temporarily languishing in jail after he yielded a .38 caliber handgun and ammunition during a raid in his house about 2: 35 in the morning on Wednesday (Sept 22) in Brgy. Bulalacao, Kawayan, Biliran. The arrest of the suspect was by virtue of a search warrant issued by Hon. Luz P. Navarette, Presiding Judge, RTC 8th Judicial Region, Branch 16, Naval, Biliran dated September 21, 2021 for violation of R.A. 10591 (The Comprehensive Firearms and Ammunition Regulation Act).

The search in the house of the suspect was in response to a report from informants that the suspect is in possession of a short firearm that he showed this to his neighbors.

The search in the house of the suspect was made in the presence of Chairman Josias F. Aberte, of Brgy. Bulalacao, Brgy. Kagawad Amelinda L. Tapiz, and the suspect’s live-in partner, Grace C Gaviola. The arrested suspect and confiscated pieces of evidence were brought to Kawayan MPS for documentation and proper disposition. – BiliranIsland.com 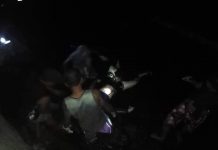