Naval, Biliran— Three persons one of which a parolee on drug case were arrested by the Station Drug Team (SDET) of the local police and the Provincial Drug Enforcement Unit (PDEU) of Biliran Provincial Police Office during a buy bust operation about 11: 25 in the evening on Saturday (Oct. 16) at Brgy PI Garcia, Naval, Biliran. Bernadez according to the police was the subject of the operation as he is on the Priority Target List of the police and PDEA. Garin is a parolee after the court approved his Plea Bargaining Agreement application after he was arrested in a buy bust operation on Aug 17, 2016 while Duterte arrested after he was caught hold by the police during the operation.

Recovered from the possession of Bernadez was one sachet containing white crystalline substance suspected to be shabu procured by an operative in the amount of P500. During a body search in front of Brgy. Officials and Representative from DOJ and Media the searching cop recovered from the suspect a candy canister that when opened yielded four more sachets containing the same white crystalline substance suspected to be shabu, three aluminum tin foils, 5 pcs. P20 and P500 bill bearing serial number FB656812 which is a court prescribed money intended as buy bust money and one Vivo Smart phone.

Also recovered by the searching operative at the body search conducted to Garin were five sachets containing white crystalline substance suspected to be shabu placed inside a cut plastic and found inside a blue coin purse and cash money amounting to P3200 in different denomination suspected to be proceeds from selling the illegal drugs along with a lighter. On the other hand the searching cop also recovered one sachet containing white crystalline suspected to be shabu from Duterte together with an aluminum tin foil and a smartphone. The police estimate the total weight of recovered suspected shabu at 2 grams with a street value of P13, 600.
No statement was issued by the two arrested persons to the media personality covering the operation except for the parolee Garin who admitted owning the illegal evidences recovered by the police from him. Charges of violations of RA 9165 the Comprehensive Law against Illegal Drugs of 2002 are being readied by the police against the suspects who are temporarily detained at the Naval Police Station. 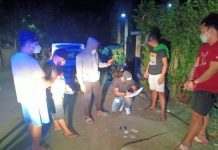