Naval, Biliran – The dawning of a new era in Biliran politics has just commenced as the ruling Bando Espina caused a rigodon of the candidacy of the top positions in the province and the capital town of Naval. In a very surprising move, Gov. Rogelio Espina, an orthopedic surgeon, withdrew his candidacy for his 2nd term as Governor at past 10AM this morning, Nov.15, 2021. This was also followed by the withdrawal of candidacies of his children. Mayor Gerard Roger Espina of Naval, running unopposed for his last and final term; and Gretchen Stephanie Espina, a former Pinoy Idol National Winner and Executive Assistant in the Capitol, running for town councilor, simultaneously withdrew and filed for new positions: Gerard as Governor and Gretchen as Naval mayor. Gov. Roger would take a rest from politìcs, at least for now. Supporters and members of Bando Espina believe that the Governor will still be in control of the political moves of his children. In an interview, Gov. Roger stated that among others, one of the reasons why he withdrew is the premordial need of his mother, Mrs. Asuncion Espina to be taken care of, particularly by a doctor like him. The ruling Bando Espina, composed of members of the Espina family and their allied political families, has been serving the province since 1995, when their father, former Cong. Gerry Espina, Sr. was elected Representative of the Lone District of Biliran.

At present, Gerardo “gerryboy” Espina, Jr. is the incumbent congressman. The Gov’s twin brother Rodolfo is the mayor of Kawayan town, whos son, Jake, is running for Vice Mayor. Their younger sister Roselyn is now running for Board Member. 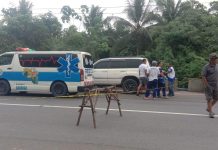